MOULD IN THE WORKPLACE

Dealing with Mould in the Workplace

Moulds are found across most of the planet, including an estimated over 100,000 species with a wide range of tolerances, growing anywhere there is moisture and organic material, including in non-sterile indoor environments in either active growing form or dormant spore form.

Significant mould contamination can occur in indoor environments following a one-off event such as water damage or from ongoing factors such as insufficient humidity control and/or ventilation, or flawed hygiene maintenance practices. Typical indoor areas that can have repeated moisture exposure, providing conditions suitable for mould growth include bathrooms, kitchens, and air conditioning systems.

For these reasons where mould contamination is identified it should not be treated as an isolated issue and possible contributing factors should also be investigated with any remediation strategy.

Exposure to low mould contamination levels presents minimal health risks for most individuals, however for some individuals, particularly those who are immune-compromised or sensitised, mould exposure can result in negative health impacts including allergic reactions, mucous membrane irritation, respiratory illness, and immunity suppression. Some moulds can also produce toxins (mycotoxins) regardless of whether the mould is alive or dead.

Risk of health impacts for these and some other individuals increases with exposure to higher mould contamination.

The other main concern with mould contamination is degradation of the contaminated material. With the presence of moisture mould will metabolise organic materials and can promote corrosion. This means for most materials, especially those that are porous, where there has been significant and/or long-term mould contamination, effective remediation is removing and replacing the material or at least encapsulating the mould contamination.

ARE THERE ACCEPTABLE LIMITS?

There are no Australian exposure limits for moulds as all individuals react differently to the same mould levels, however it is widely accepted that exposure to mouldy and damp environments will result in negative health impacts in some individuals. Those who are immune-compromised or have other pre-existing health conditions are at greatest risk. These health impacts include allergic reactions, respiratory infections, and depressed immune system.

The Workplace Health and Safety Act 2011 issues a mandate to building owners and managers with the responsibility to prevent a person’s death, injury or illness being caused by a workplace, by workplace activities or by specified elevated risk plant. Therefore, building managers and owners are faced with the responsibility to ensure indoor air quality is maintained in workplace tenancies.

It is widely accepted that outdoor airborne mould organism concentration levels should be greater than indoor airborne concentration levels. Where this is not the case it is an indication that there is a mould problem within the building where bioaerosols are being produced. This is not the only criteria used to assess the severity of mould infestations. Other criteria including species drift and the presence of pathogens are also considered. High mould concentrations can also occur when there is poor air filtration of external air in air handling systems.

As the main environmental control for most indoor environments; air conditioning systems must be maintained in accordance with standard AS/NZS3666.2:2011, Air-Handling and Water System of Buildings – Microbial Control, Part 2: Operations and Maintenance. This standard specifies the components that are required to be inspected and their hygiene maintained. This standard is a Building Code of Australia Primary referenced standard and is therefore mandatory.

For other surfaces in an indoor environment clearly defined and standardise acceptable hygiene levels can be found in the international standard and reference guide from the Institute of Inspection, Cleaning and Restoration Certification (IICRC) S520 for Professional Mould Remediation.

What Can Be Done – Prevention

Minimising mould intrusion can include engineering controls for outside air intakes and ventilation systems, including air filtration and treatment in air conditioning, and process controls such as regimented hygiene inspections and maintenance.

Relative humidity levels should be kept below 65% in an indoor environment to also ensure conditions do not become suitable for mould and where a space is regularly closed off further air movement may be required.

As a rule, other surfaces in an indoor environment should be kept visibly clean to prevent the colonisation by mould.

What Can Be Done – Reaction

Where significant contamination has been identified investigation into the cause of the contamination should always be included in any of the corrective actions. The engagement of an indoor environment consultant can best facilitate this process.

Where mould contamination is identified on other indoor surfaces remedial works should be conducted in accordance with the international standards and reference guides from the Institute of Inspection, Cleaning and Restoration Certification (IICRC) S520 for Professional Mould Remediation, and S500 for Professional Water Damage Remediation. 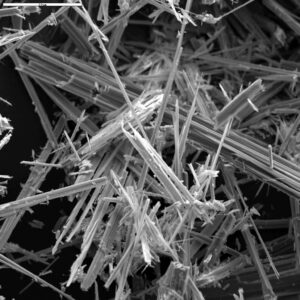 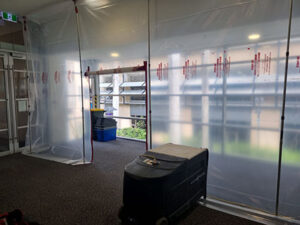 MOULD IN THE WORKPLACE 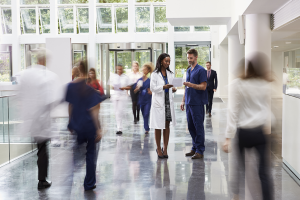 COVID-19 AND AIR QUALITY IN HEALTHCARE

Understanding air filtration and UV disinfection in a medical environment 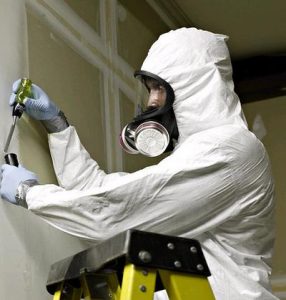 Asbestos Registers – What you need to know

Why invest in an extraction system?