Isokinetic probes are used for two reasons in life science applications. First, smaller particles <1 μm remain entrained in the air stream.  However, isokinetic sampling is needed to capture larger macroparticles (> 5.0 μm) that are substantially influenced by inertia and sedimentation (i.e., gravity) that frequently prevents the macroparticle from being pulled into the inlet. Second, isokinetic sampling ensures that particles pass through a defined area within a defined time without disturbing the particle’s path or the surrounding air around the probe (i.e., laminar flow). If there is turbulence around the inlet, which there will be without a probe, it can repel particles belonging to the sample. 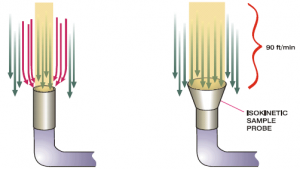 Sampling in cleanrooms is conducted in either Turbulent Air Flow or in Laminar Air Flow areas:

Sampling with isokinetic probes is required in Unidirectional Flow (i.e., laminar flow) areas. (1) (2) (3) (4) These are typically in critical areas, biological safety cabinets, isolators, and RABS.  The isokinetic probe, in this environment, ensures air surrounding the particle counter inlet is not disturbed and laminarity is maintained.

Regarding unidirectional airflow (UDAF) areas, during routine monitoring, sample probes should be positioned at work height (not 30″ above the floor per the old FS209E), and pointed in the direction of the laminar flow. They should be positioned in such a way that the probability of detecting particles is maximized, i.e. downstream of the process, and pointed into the airflow that has just passed the product. Where this is not possible, probes should be positioned in the area surrounding the product (within 12″) and not towards clean air flow directly out of the HEPA filter (i.e., not upstream of the process).  (1)(2)

In non-unidirectional flow areas, Climet recommends pointing the probe upwards toward the ceiling.

Light blocking isokinetic probes are installed directly on the portable particle counter’s inlet nozzle without tubing, and is used to block indoor lighting from creating false counts. It will be very evident that false counts exists as they will be extremely high, frequently into the millions. This is due to fluorescent lamps that generally blink at 60 Hz. Ultraviolet (UV) light produced inside the fluorescent light tube also fluctuates 120 times per second.

This blinking light is captured by the sensor and interpreted as light scatter from a particle. Competitively other particle counter manufacturers address this problem differently.  Most competitors use a reduced optical sensor design (i.e., side scatter or front scatter) that has the effect of limiting the amount of light scatter observed by the photo detector. Given particle morphology and orientation, this will result in reduced accuracy and stability (or precision) of measurement. One competitor has a flange on the interior of the inlet that blocks light from entering the sensor; however, this solution disrupts laminar flow resulting in counting errors. Another competitor has an elongated inlet with a very small hole, and claims their solution effectively blocks light. However, Climet testing suggests this statement is inaccurate.

Unlike our competition, Climet is exclusively dedicated to the life science industry, where accuracy and stability of measurement are of utmost importance, and in this regard Climet is committed to never compromise on quality.

Climet has tested our light blocking probes and confirmed that particle loss is <1%.  This is due to Climet’s unique bulleted pitot design that both blocks light and ensures laminar air flow. The light blocker probes are constructed of black-anodized aluminum to absorb (and not reflect) light scatter. Applications where a light blocker isokinetic probe is used would be in sequential monitoring with a portable particle counter.